The correct name of the structure housing the bells is The Queen’s Tower, Imperial College. References to “Kensington” in older versions of Dove’s Guide are incorrect, probably arising from the name of the nearby (SW7) postal sorting office — see the red line on the OS map; in fact the College and the tower are both in the parish of Holy Trinity, Prince Consort Road, which was carved out of the old parish of St Margaret’s Westminster, and both lie in the modern City of Westminster. The planning department of Westminster City Council (to whom Imperial College pays its rates) confirm this view. A marker stone in Hyde Park bearing the inscription KP|WP marks the ancient parish boundary with St Mary Abbots’ Kensington, and the modern admistrative boundary appears to follow this line (grey on the OS map). Imperial College’s Archivist also confirms that references to “Queen Anne’s Tower” are equally spurious.

The tower is the only surviving part of the Imperial Institute (more from the RIBA and Wikipedia) building designed by Thomas Edward Collcutt FRIBA (1840-1924), begun in 1887 and completed in 1893. Although widely regarded as Collcutt’s masterpiece, the building was never fully completed and no proper function was ever found for it, though it served at various times as the India Office and as the headquarters of the University of London before the completion of Charles Holden’s Senate House in Bloomsbury. Its cavernous great hall was used for examinations, and was notorious among students in the 1950’s for its leaking “temporary” plywood ceiling and the loose-bowelled sparrows which inhabited it.

There is a brief chronology of the tower here.

The main part of the building was finally demolished in 1963-4 as part of the expansion plans for Imperial College, and the tower was only saved after a public campaign led by Sir John Betjeman. Other notable Victorian buildings in the area such as Fairfax Wade’s Royal School of Needlework and Alfred Waterhouse’s City and Guilds Institute were not so lucky, though the Gillett clock and clock bells of the latter were retained in the Mechanical Engineering Building which replaced it. At this time the tower was extensively underpinned and stiffened with concrete ring beams, and now sways much less (currently 8mm at ringing chamber level) than before the demolition. Two surviving buildings by Collcutt, the Wigmore Hall and the Palace Theatre give a faint hint of the style and grandeur of the mighty “Institute”, as it is still known to ringers.

The bells were originally a gift to Queen Victoria from an Australian millionairess, Elizabeth M Millar of Melbourne, and although the tower now belongs to Imperial College, the bells remain the property of the Monarch. It is not clear whether the Institute was originally planned to have either tower or bells; the foundation stone was laid in 1887 (in a ceremony which included an ode composed by Sir Arthur Sullivan), but Collcutt’s drawing of the tower is dated 1888 and makes no reference to a bell installation. By the time the Institute was officially opened on 10th May 1893, Sullivan’s ode had expanded to an “Imperial March”, the tower was built and the bells installed. At a signal from an electric buzzer, they were inaugurated by a picked band of Cumberland and College Youths (C. H. Hattersley Treble, G. Newson 2, C. F. Winney 3, A. P Heywood Esqr. 4, H. Baker 5, J. W. Washbrook 6, W. L. Catchpole 7, Rev. G. F. Coleridge 8, J. W. Taylor, Jun. 9, F. G. Newman Tenor) ringing a touch of Stedman Caters specially composed by Sir A. P. Heywood.

The first peal was Stedman Caters on 9th August 1902 for the coronation of Edward VII. Peals followed in 1903 and 1904 but the tower soon became a rarity, and only two more were rung while it remained under the jurisdiction of the crown, one in 1924 and one in 1964. The footnote to the 1924 peal hints at the obstacles to ringing peals there and the ingenuity of ringers in overcoming them: “This peal was rung to celebrate the official opening of the British Empire Exhibition at Wembley, by His Majesty George V, and was organised by special permission of the First Commissioner of His Majesty’s Works”. The 1964 peal was “Rung as a compliment to HRH Prince Charles on his 16th birthday anniversary” and was probably thought to be the last ever attempt on the bells, the building being derelict. Fortunately this was not the case, and Imperial College has proved to be a more amenable custodian than the Ministry of Works, with peal attempts now permitted annually on Christmas Eve. A total of 33 peals have now been rung, plus 1 false peal and 8 lost.

The bells are collectively known as the “Alexandra Peal” or “Alexandra Ring”, as recorded in the inscription on the 8th. They were cast by Taylors in 1892, just prior to full Simpson tuning (Bill Hibbert has an interesting tonal analysis) and are the 4th(†) heaviest ring of 10, with a tenor of 38 cwt 1 qr 15 lb (1,950 Kg) in D-flat. Each bell has 2 string lines above and below the shoulder inscription, 3 strings on the waist and 2 strings on the soundbow. A founder’s mark appears on the shoulder of each bell between the end and the start of the inscription. Bells 1, 2, 3, 4, 5, 8 and 9 display the Prince of Wales’ feathers above the name of the bell. All words are in capitals with line breaks and punctuation as shown below. We have additionally given the values for the weights to kilograms and for the diameters to millimetres. 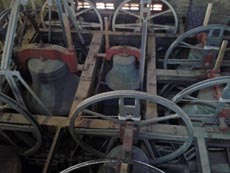 The bells were rehung between 1977 and 1984 following a lost peal for the Queen’s Silver Jubilee and now hang on iron headstocks fitted with ball bearings. On rehanging the front four in 1980 the canons were removed; the other six bells were not cast with canons. The frame is a combination of wood and cast iron, with all the bells hung on one level.

The bells are currently rung for the following Royal and College occasions (plus special dates for this year):

On weekdays, ringing takes place between 1pm and 2pm and visitors are always welcome. If you intend to visit, if the date falls on a weekend, as a quarter peal may be arranged. You should bear in mind that with 239 steps to the ringing chamber, a 38 cwt tenor and considerable tower movement, strong legs and arms and good bell-handling are indispensible qualifications for ringing here.

There is a 360° view of ringing for the Queen’s 90th birthday on YouTube. Once the video starts playing, use your mouse to click on the screen and drag the view around. If you are watching thorugh the YouTube app, you can tilt your phone to move the view around. (This might not work on older browsers.)
There is another YouTube video with a potted history of the tower.